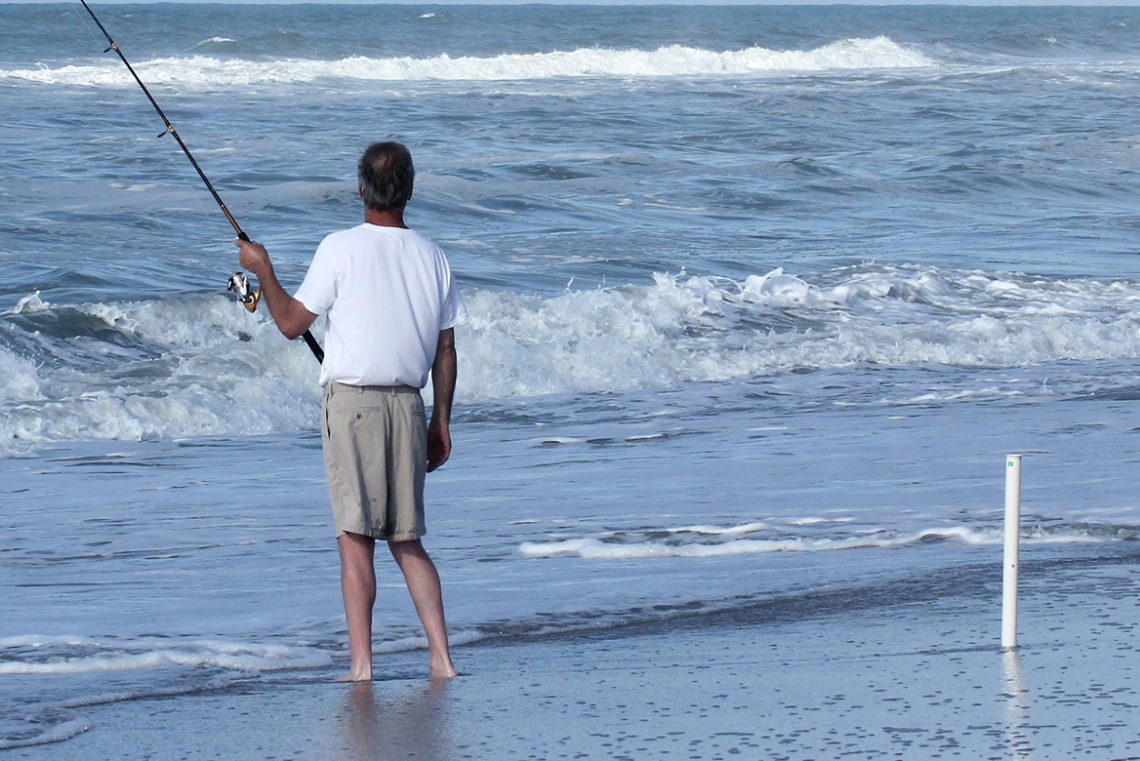 The Outer Banks began as a fisherman's paradise and continues its reputation today as one of the best fishing destinations on the East Coast. In Kill Devil Hills, anglers will find plenty of good catches on the beaches, from the pier, and even in the open Albemarle Sound waters, making the town a great, central locale to cast a line. All anglers over the age of 16 require a NC Saltwater fishing license, also known as a Coastal Recreational Fishing License (CRFL), in order to fish off the local beaches and soundfront waters.

Licenses vary in price, but non-resident North Carolina visitors can typically obtain a temporary 10-day license for around $10. (For NC Residents, the cost is $5.00.)

Licenses can be obtained online at the North Carolina Wildlife Resources Commissions' website at http://www.ncwildlife.org/, or can be picked up at area tackle stores, as well as the Kmart in Kill Devil Hills and the Walmart in Kitty Hawk.

Fishing is allowed on all beaches along Kill Devil Hills, provided the angler has a valid saltwater fishing license.

Because the Kill Devil Hills beaches are typically busy in the summer months, anglers will want to pay close attention to the beach-goers around them and abide by the following guidelines:

Anglers will have a lot of options to choose from when it comes to where to go to reel in the best catches.

Albemarle Sound - On the soundside, mariners who are fishing by boat will find a NC Wildlife boating access at Dock Street which includes vehicle parking, a boat launching area, and picnic grounds. Soundside anglers can also head to the small piers and soundfront gazebos found at the Hayman Boulevard and Third Street Estuarine Accesses.

Surf Fishing - There are numerous public beach accesses in Kill Devil Hills for anglers, and surf fishing is allowed throughout the town. Many vacation rental homes also offer fishing cleaning tables with water and / or lights for visiting fishermen.

Types of Fish to Catch

What an angler catches is very dependent on the season and the region, but fishermen should be on the hunt for the following species.

The Albemarle Sound is known for crappie fishing and striped bass, especially in the regions that are closer to the adjacent rivers. Close to shore, anglers will find good clamming and a selection of saltwater species including flounder, sheapshead and baiting mullet.

On the oceanside, surf and pier fishermen can expect to reel in bluefish, croakers, flounder, sea trout, sea mullet, pompano, Spanish mackerel, spot, and stripers, just to name a few. Bigger fish, including cobia and kings, are also seasonally available, as well as red drum.

The Avalon Fishing pier has a fishing report as well as a pier cam that can be found online at http://www.avalonpier.com/index.html so visiting anglers can see what's biting. Note that shark fishing is NOT allowed from the Avalon Pier.

The Outer Banks is home to a wealth of fishing tournaments, both inshore and offshore, thanks to its reputation as the Game Fish Capital of North Carolina.

Locally, Kill Devil Hills visitors can take part in a number of fishing tournaments that are held at Jennette's Pier in Nags Head, including the July Nags Head Youth Fishing Tournament.

Pirate's Cove marina in Manteo, located a quick 20-30 minute drive away, has a wide range of offshore tournaments throughout the year, including the famed Pirates Cove Billfish tournament - now in its 30th year - and the Alice Kelly Tournament for female anglers. (Both tournaments target marlins in the offshore Gulf Stream.)

Further south, anglers will also find a huge range of surf fishing tournaments on Hatteras Island, including the annual Red Drum Tournament, which has been going strong for more than 60 years.

Tournaments are announced months in advance, and usually require an advanced reservation fee or registration. Check out the Jennette's Pier website at http://www.jennettespier.net/ for information on surf fishing tournaments that are close to home.

There are a surprisingly large number of inshore and offshore fishing charters found in Kill Devil Hills, which are primarily concentrated along the soundside, just north of the Oregon Inlet Fishing Center.

Inshore charters concentrate on the Albemarle Sound waters, adjacent rivers, and estuaries where striped bass and crappies can be found, while offshore charters head to the Gulf Stream via Oregon Inlet, which is allocated about 20-30 miles away.

Charter boats that are conveniently located for Kill Devil Hills visitors include the following: 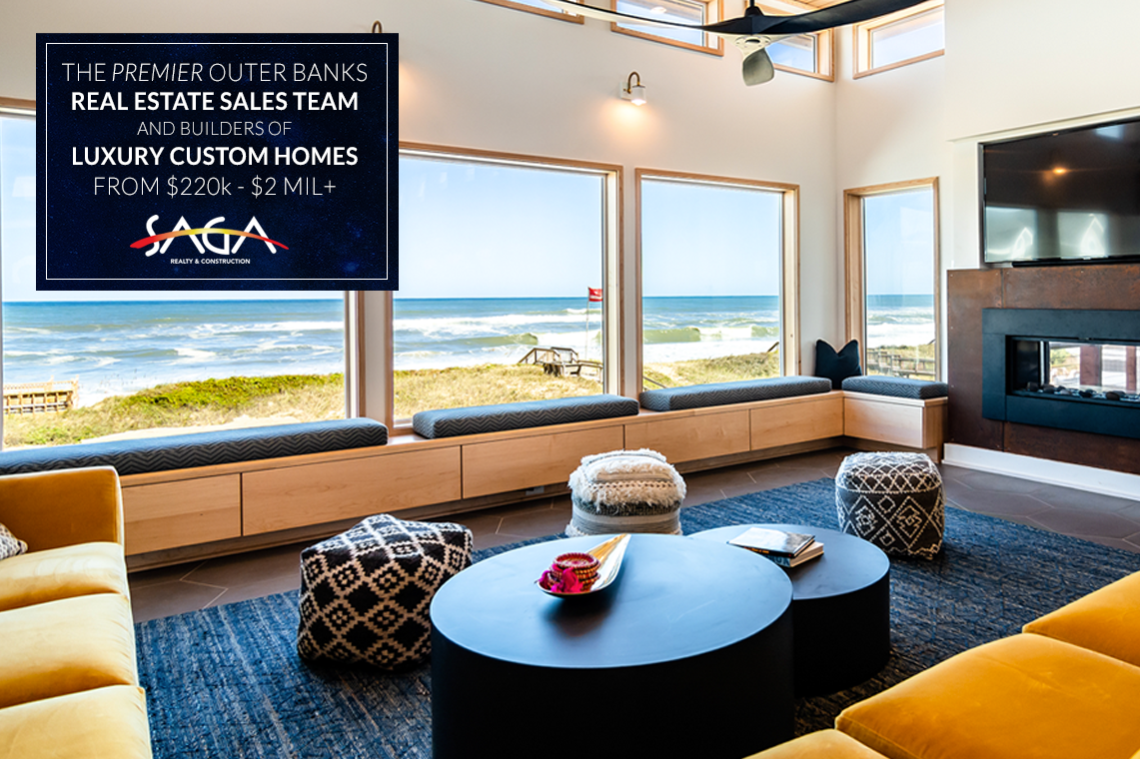 SAGA Realty and Construction is known for building beautiful luxury homes on the Outer Banks in a range of prices, from $220k to $2M+. We are also a full-service Real Estate Firm and a planned community developer. Simply put, we are the go-to place for all of your Outer Banks real estate and construction needs. 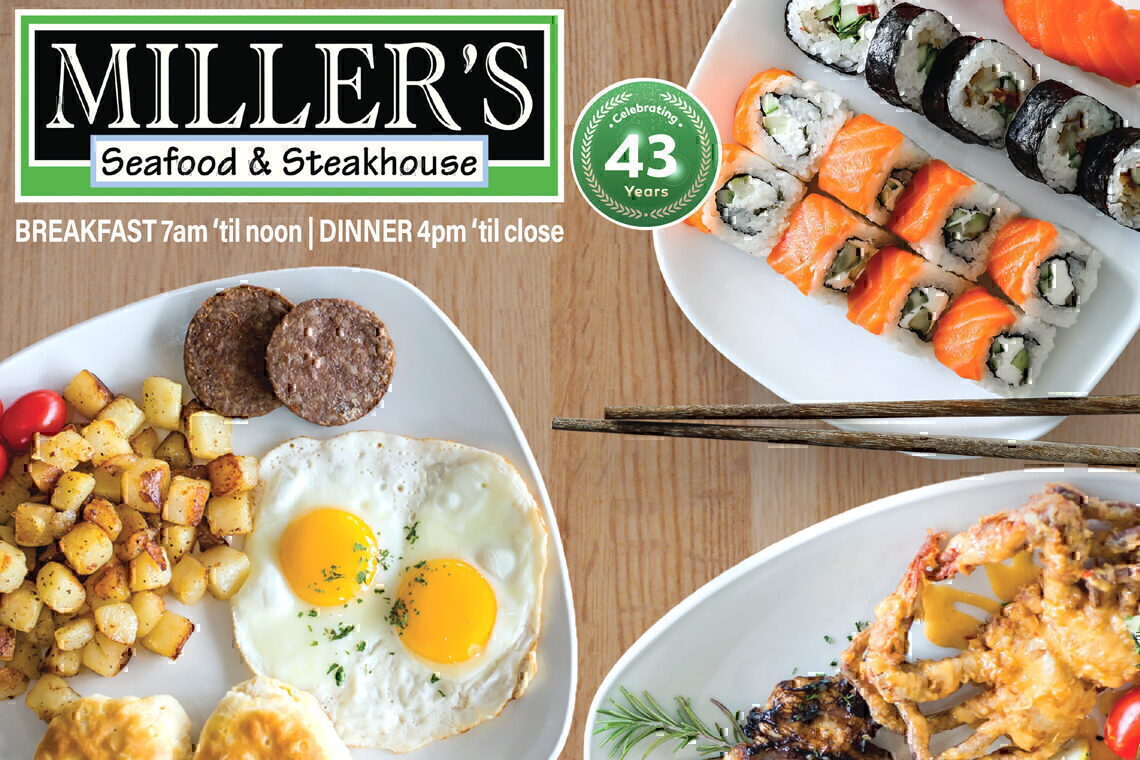 Miller’s Seafood & Steakhouse has been a favorite among locals and visitors for more forty years. Offering delicious southern cuisine for both breakfast and dinner in a casual family atmosphere infused with coastal flair, it’s no wonder this Kill Devil Hills restaurant is a family tradition for so many. You’ll love waking up to favorites like biscuits and gravy, farm fresh eggs and buttermilk pancakes. Dinner options are just as tempting with menu items that include the freshest Outer Banks Catch seafood, she crab soup, Angus beef and fried green tomatoes just to name a few. Not only does Miller’s Seafood & Steakhouse offer great breakfast and dinner options, Miller’s newest menu item – Hawaiian/American Fusion Sushi – is sure to please the sushi lover in you. From the Miller’s Roll that combines tempura fried crispy lobster tail with tantalizing ingredients to the High Tide and OBX Roller, guests will love choosing from a delicious variety of sushi options developed and prepared by Miller’s expert Sushi chef.

Along with its scrumptious cuisine, Miller’s Seafood & Steakhouse offers a warm friendly atmosphere coupled with genuine Outer Banks hospitality. You’ll discover that not only is Miller’s a tradition for so many, it’s also a Miller family tradition. Two generations of Millers have worked side by side to make the Kill Devil Hills restaurant a favorite for all who pass through its doors. Owners Brian and Beth Miller want guests to feel at home and can often be found making rounds to check on customers and mingle with them as they dine.

Here at Miller’s, everyone is treated like family as they experience an unforgettable dining experience. Large parties are also welcome, making it perfect for extended families to enjoy dining together on their Outer Banks vacation. Come on in and see for yourself why Miller’s Seafood & Steakhouse is more than just a great restaurant. It’s a tradition.

It was 1978 when Eddie and Lou Miller first opened Miller’s Seafood and Steakhouse. As a teenager, their son Brian spent his summers working in the restaurant, getting familiar with the family business. After college, Brian and his wife Beth came back to Kill Devil Hills and began working together at Miller’s. Brian and Beth officially purchased the restaurant from Eddie and Lou in 2007. A few years later they opened American Pie together, and both restaurants now carry on the Miller family tradition of quality, excellence and hospitality. 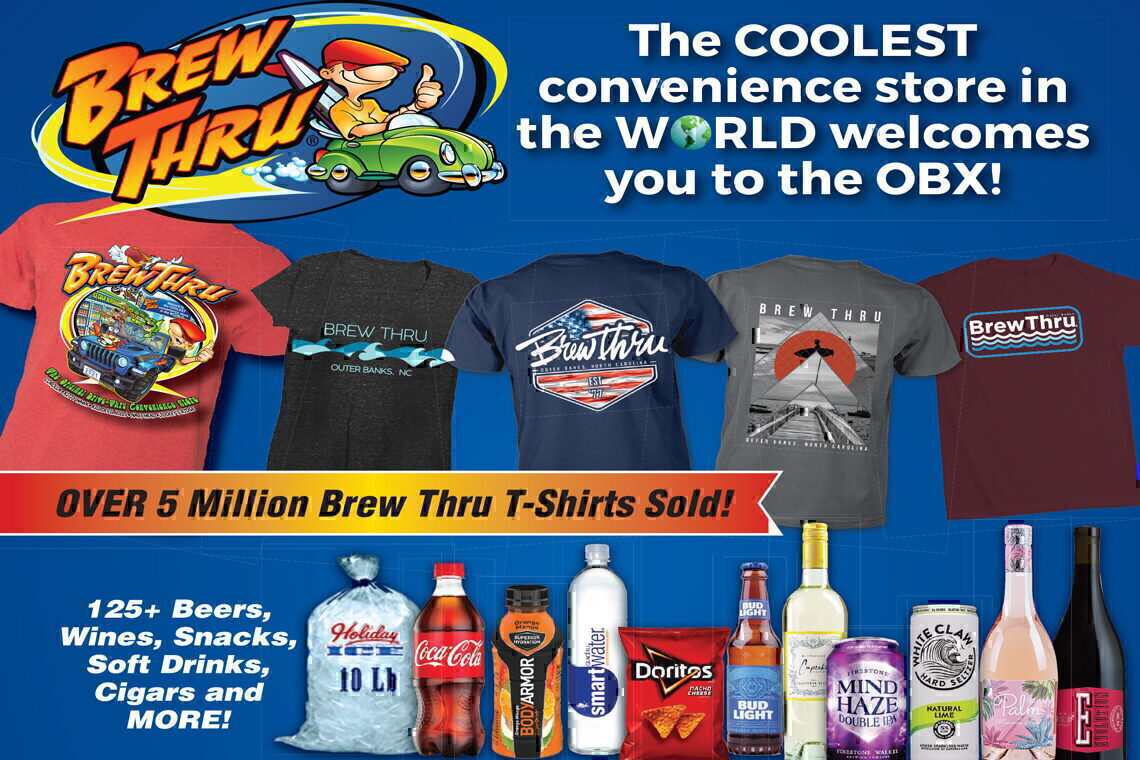 No trip to the Outer Banks is complete without cruising through Brew Thru, the Outer Banks’ original drive thru convenience store. Whether you’re looking for a refreshing cold beverage of Coke, Pepsi and other soft drinks on the go, stocking up your cooler with refreshments to enjoy at the beach or piling up on beer and wine for a party, Brew Thru is a fun and unique experience all vacationers need to see for themselves.

Brew Thru is Your One-Stop Shop at the Beach

The year was 1977, and Dana and Becky Lawrentz were chatting with friends over brews in their hometown of Akron, Ohio. They got to talking about a gas station convenience store in the area that had built a makeshift drive-through. Everyone agreed it would be pretty great if you could actually drive through a convenience store and pick up everything you needed without getting out of the car. But what would you call a place like that?

Well, you’d call it a Brew Thru.

It was an idea they couldn’t shake, so the Lawrentzes moved to the Outer Banks and built the first Brew Thru with the help of a partner. The idea was that people could come buy everything they would need for their trip to the beach—beer, wine, soft drinks, snacks, ice—without getting out of the car. That same year, a t-shirt salesman visiting the store and talked them into adding t-shirts to their product line—and 44 years later there are now more than five million Brew Thru t-shirts out in the wild.

The Lawrentzes’ daughter Brandy and her husband Philip Foreman purchased the business from them in 2002, and they now operate five locations across the Outer Banks.“We love being the one-stop shop for folks on the way to their beach house,” Foreman says. “Our car tenders are the friendliest people at the beach. We’re here to greet you, get you everything you need for your trip, load it up in the trunk for you, and have you leaving with a smile on your face.”

The store is quite expansive, featuring more than 100 brands of beer, dozens of wines and even a vast selection of cigars—not to mention all the snacks, t-shirts and other gear. To make ordering a little easier, customers in line get a menu—fondly known as the Summer-y—that outlines everything available at the store. These Summer-ies are also available in many of the beach rentals, which allows vacationers to decide what they want before driving through.

For customers who would like to get out and stretch their legs, there’s the Brew Thru Shop in Kill Devil Hills, where you can find their world famous t-shirts and other gifts. New t-shirt designs are created each year, making a yearly Brew Thru t-shirt a favorite of locals and annual visitors to the Outer Banks.

The Foremans both grew up in the Outer Banks, and they love that Brandy’s parents’ vision for a friendly and convenient place for people to grab their brews and other beach stay essentials is continuing to flourish.

“Our family has been welcoming people to the Outer Banks since 1977,” Foreman says. “We love this beautiful place, and we want everybody to get to enjoy it.” 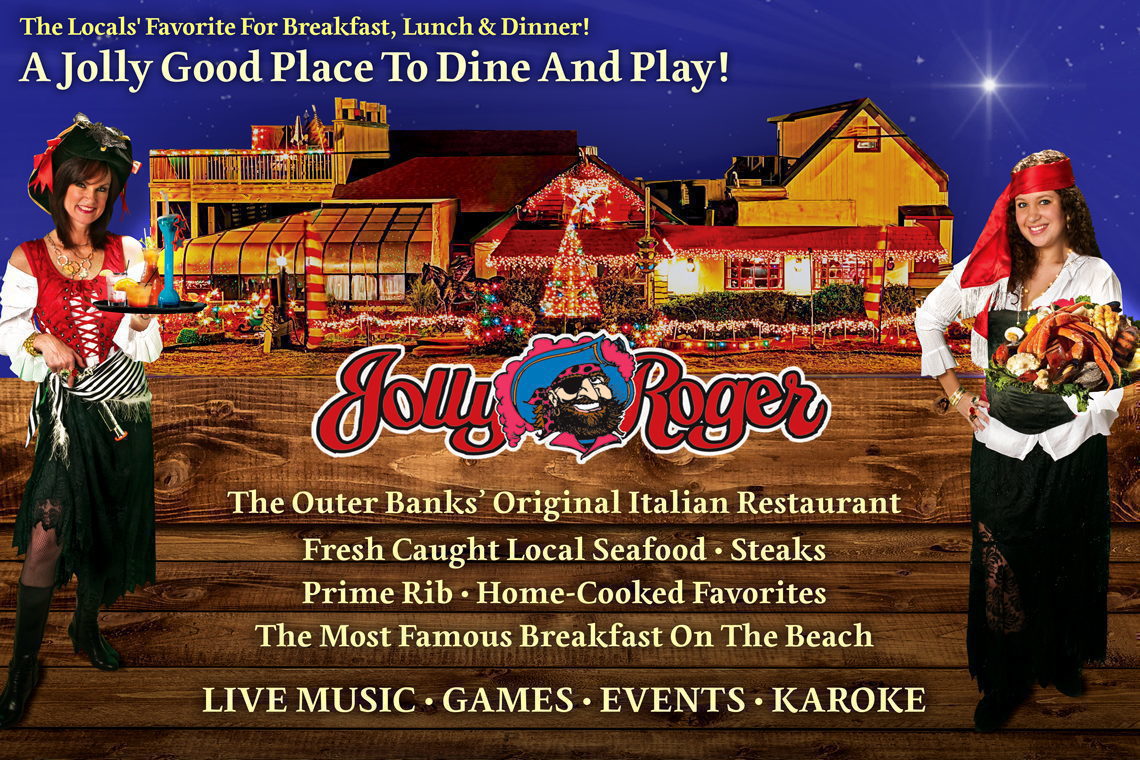